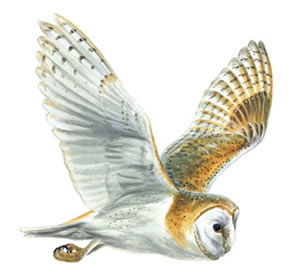 Generally nocturnal, although it is not uncommon to see Barn Owl's emerge at dusk or be active at dawn, occasionally being seen in flight during full daylight. Flight is noiseless, with wingbeats interrupted by gliding.

Barn Owls specialise in hunting small ground mammals, and the vast majority of their food consists of small rodents. Voles (field mice) are an important food item, as well as pocket gophers, shrews, mice and rats. Barn Owls breed rapidly in response to mouse plagues. Other prey may include baby rabbits, bats, frogs, lizards, birds and insects. Prey are usually located by quartering up and down likely looking land - particularly open grassland. They also use low perches such as fence posts to seek quarry.

The Barn Owl calls infrequently, the usual call being a drawn-out rasping screech. The courtship call of male at nest is a shrill repetitive twittering. Adults returning to a nest may give a low, frog-like croak. When surprised in its roosting hollow or nest, it makes hissing and rasping noises and snapping sounds that are often called bill snapping, but possibly made by clicking the tongue