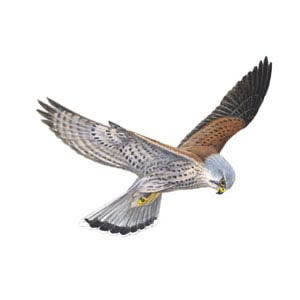 Despite being persecuted during the 19th century when gamekeepers virtually eliminated it from some parts of the British Isles, the Kestrel made a successful comeback thanks to its remarkable adaptability. It has learned to take advantage of new hunting areas such as roasides and even town centres. It is also able to switch to different prey whenever occasional slumps in the vole population occur.

Although the Kestrel is a true Falcon, its flight-style, prey and method of hunting are far from typical. The Kestrel feeds mainly on small mammals - principally the short tailed vole - which it hunts by hovering, head into the wind; or which it spots from a perch.

Mature male Kestrels are easily distinguished from females, being a warm red-brown colour with a grey head  and tail. The female is mainly brown with darker speckles and bars and is slightly larger with a wingspan of over 75cms.