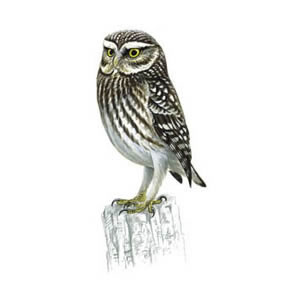 The aptly names Little Owl is Britain's smallest owl with a wingspan of less than 60cms and weighing only upto 230gms. But its aggressive expression, accentuated by pronounced eye ridges and a relatively undeveloped facial disk, makes this tiny predator appear fierce out of all proportion to its size.

For most of the year the Little Owl's diet consists mainly of llarge insects, earthworms and a few small mammals. However; during the breeding season, this is supplemented with small birds such as sparrows nd thrushes.

Whilst the Little Owl is now native to Britain, it is only a recent arrival, having been introduced by man in the late nineteenth century. The first breeding success was recorded in Rutland in 1891 following the importation of a great many Owls fro Holland by Lord Lilford. Numbers grew rapidly and reached a peak in about 1930.

Since then, the population has declined, due largely to the loss of habitat, pesticide poisoning and - because largely diurnal habits - persecution and collision with road traffic.