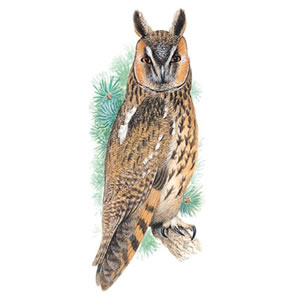 Superb camouflage, an ability to alter its shape to blend with its surroundings (by fluffing-up or flattening its feathers), very nocturnal habits and a tendancy to favor woodland habitat - all these factors make the Long-Eared Owl the least well known of Britain's native owls.

The Long-Eared Owl's most prominent feature is the pronounced 'ear' tufts from which it derives its name. In most 'tufted' owl species (the Eagle Owl family, for example) these have probably nothing to do with hearing but are manoeuvred by the owl to reflect mood or to aid with camouflage. The Long-Eared Owl has remarkable hearing: its facial disc channels sound to complex and asymmetric ear openings which run nearly the full height of its skul. The muscles required to alter the position of the ear tufts are also thought to play a part in changing the shape of the ear openings and therefore, may well mean that in the case of the Long-Eared Owl the 'ear' tufts have a role to play in hearing that enables the owl to detect, locate and strike at prey with total accuracy, even in complete darkness.

During the breeding season the Long-Eared Owl relies mainly on mice and voles for its food, but during the winter will shift its feeding habits and place a far greater reliance of small to medium-sized birds. This trend is almost unique to the UK and happens in few other countries.