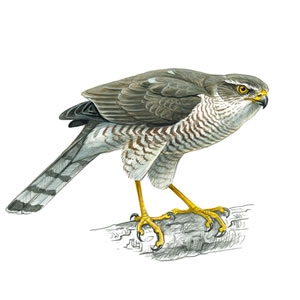 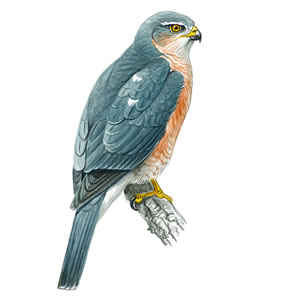 Although the Sparrowhawk shares the severe decline of other British Raptors (resulting from persection and the advent of organochlorines). It had made a remarkable recovery and the population is restored.

A rather small bird with short, broad wings, a long tail and long, slender legs, the Sparrowhawk is ideally suited to life in the woodland.

The Sparrowhawk preys on small birds and uses its great agility to pursue its prey through the woodland at hugh speed. However, it is sometimes so intent on its prey that it collides with trees and other obstacles: many are killed or injured in this way.

Sparrowhawks can carry prey as large as themselves (the female is 25% larger than the male with a wingspan of up to 70cms) and will frequently take their kills to a favorite post to be plucked.